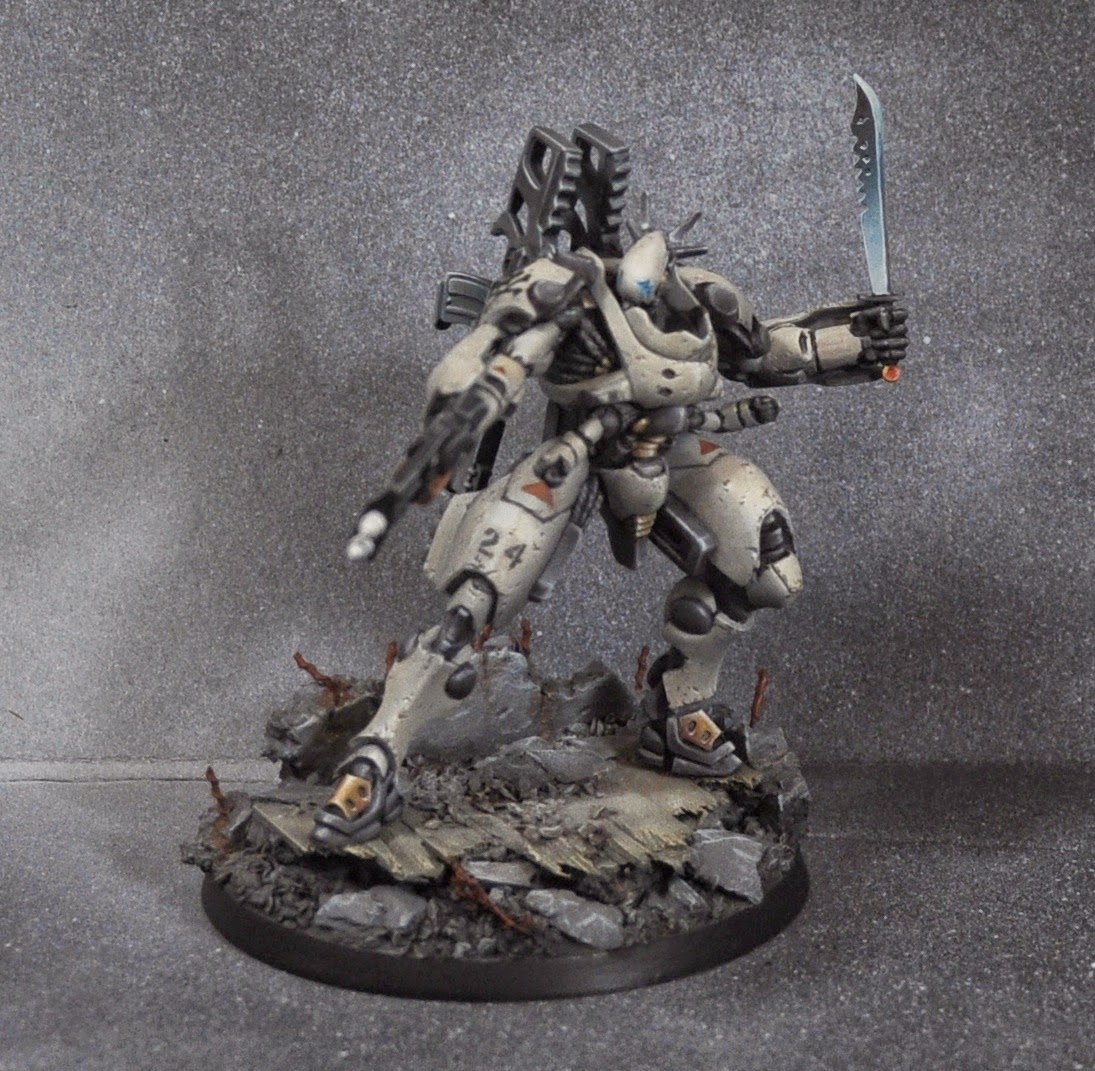 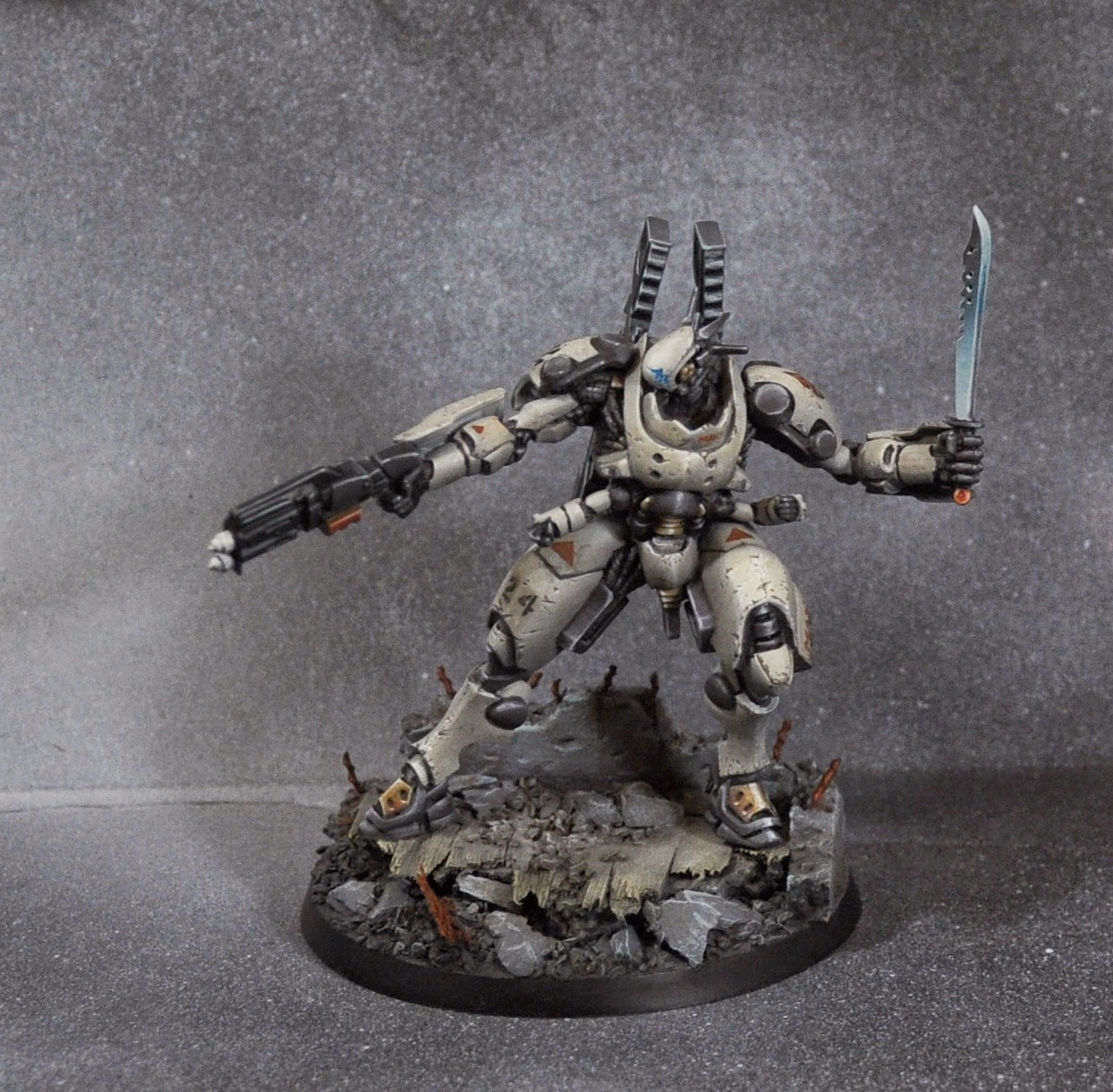 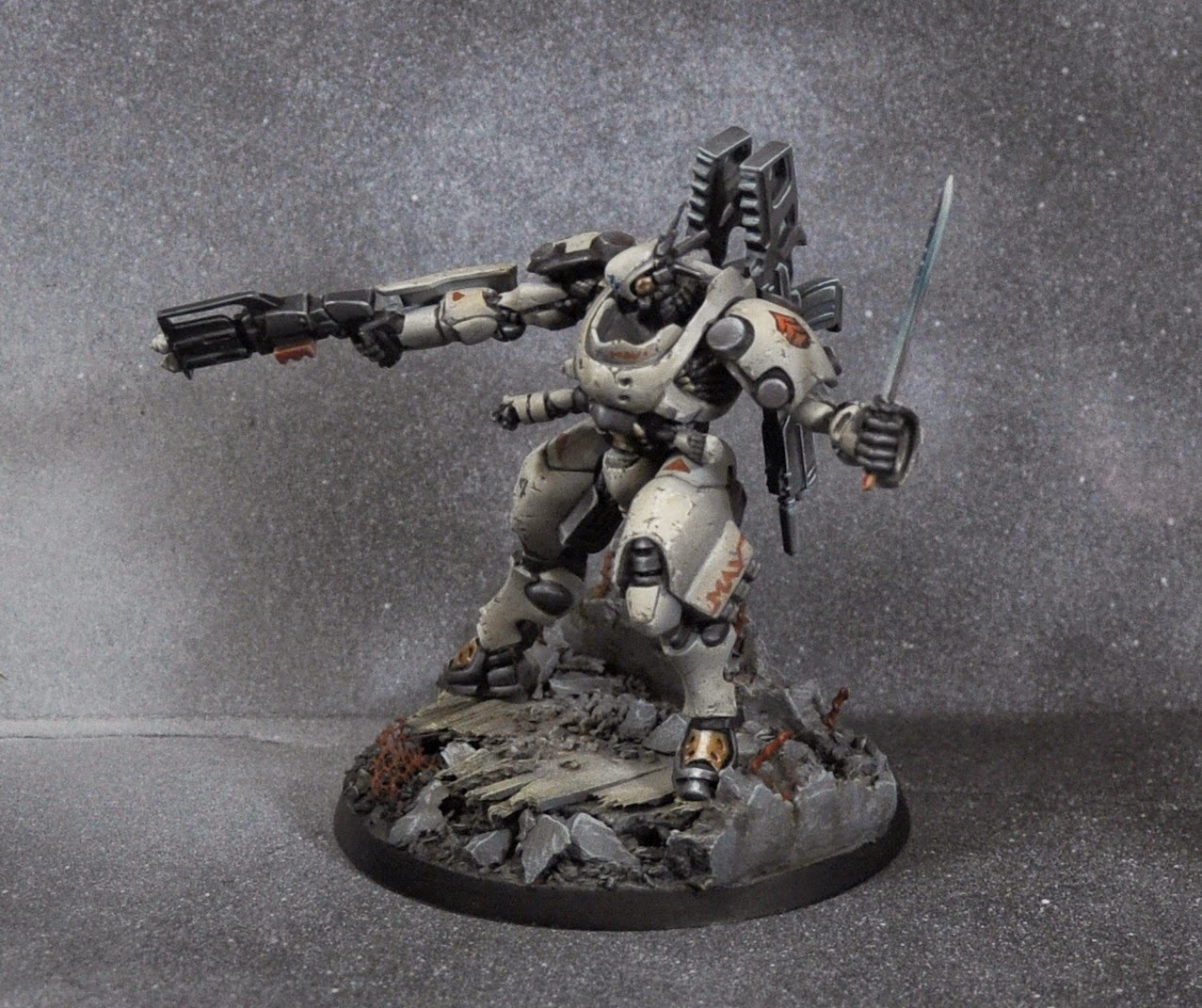 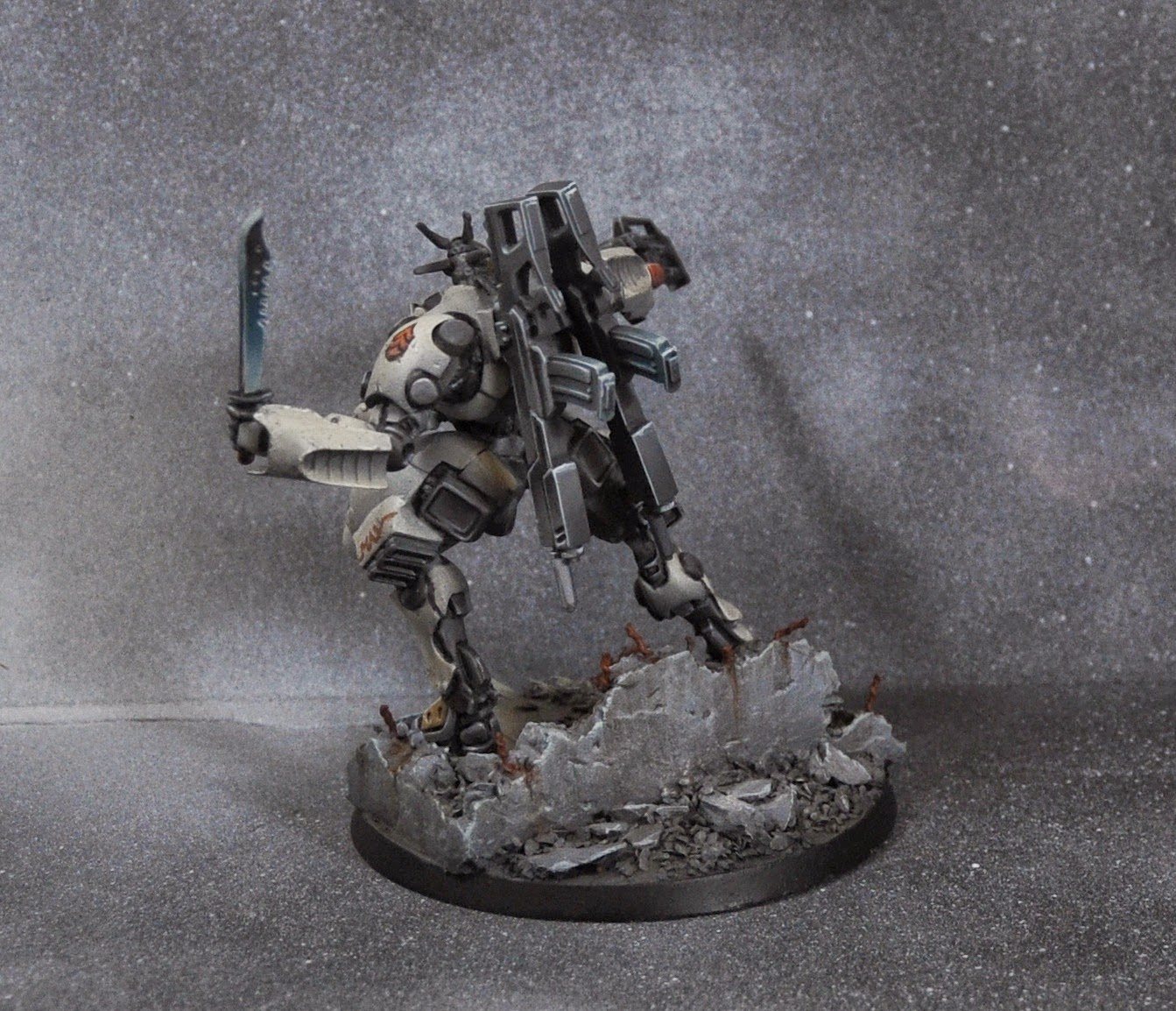 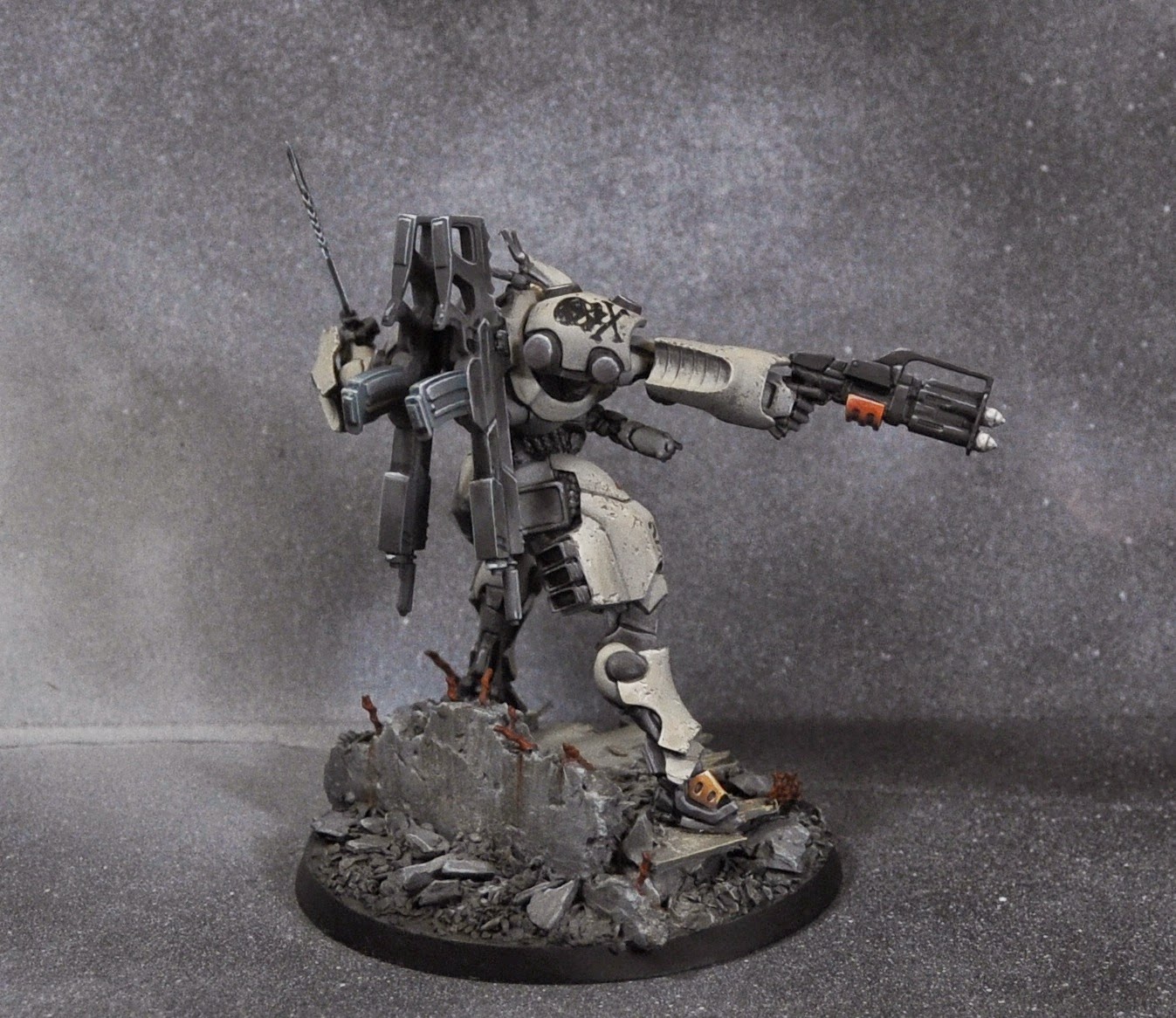 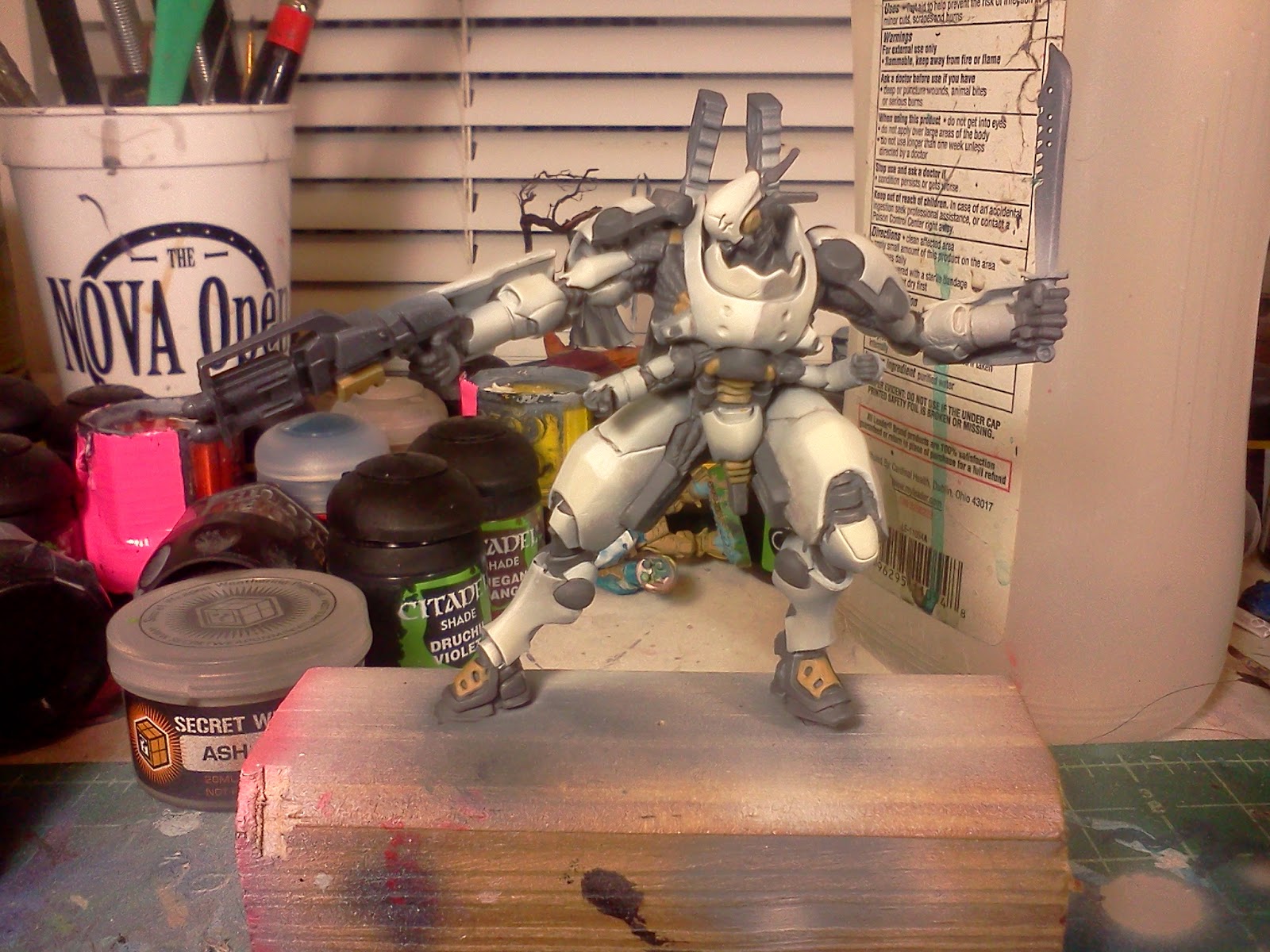 At the risk of getting repetitive, I've opted for a warm off-white for Scarface, as opposed to a cold off-white for the Tohaa. I'm drawing inspiration for Scarface from the Titanfall video game. Never played it but I enjoy the artwork in it. Those mechs are friggin sweet.

The orange bits on Scarface will eventually look like dirty copper, and the grey will look a little more like metal once it's done. The trouble with making some armor bits metallic is that I have to distinguish them from the weapons, which also have to be some form of metal.

Here is the base. I'm getting a little more ambitious with them as I go. Its an area I really need to improve, as pointed out by some thoughtful critics. 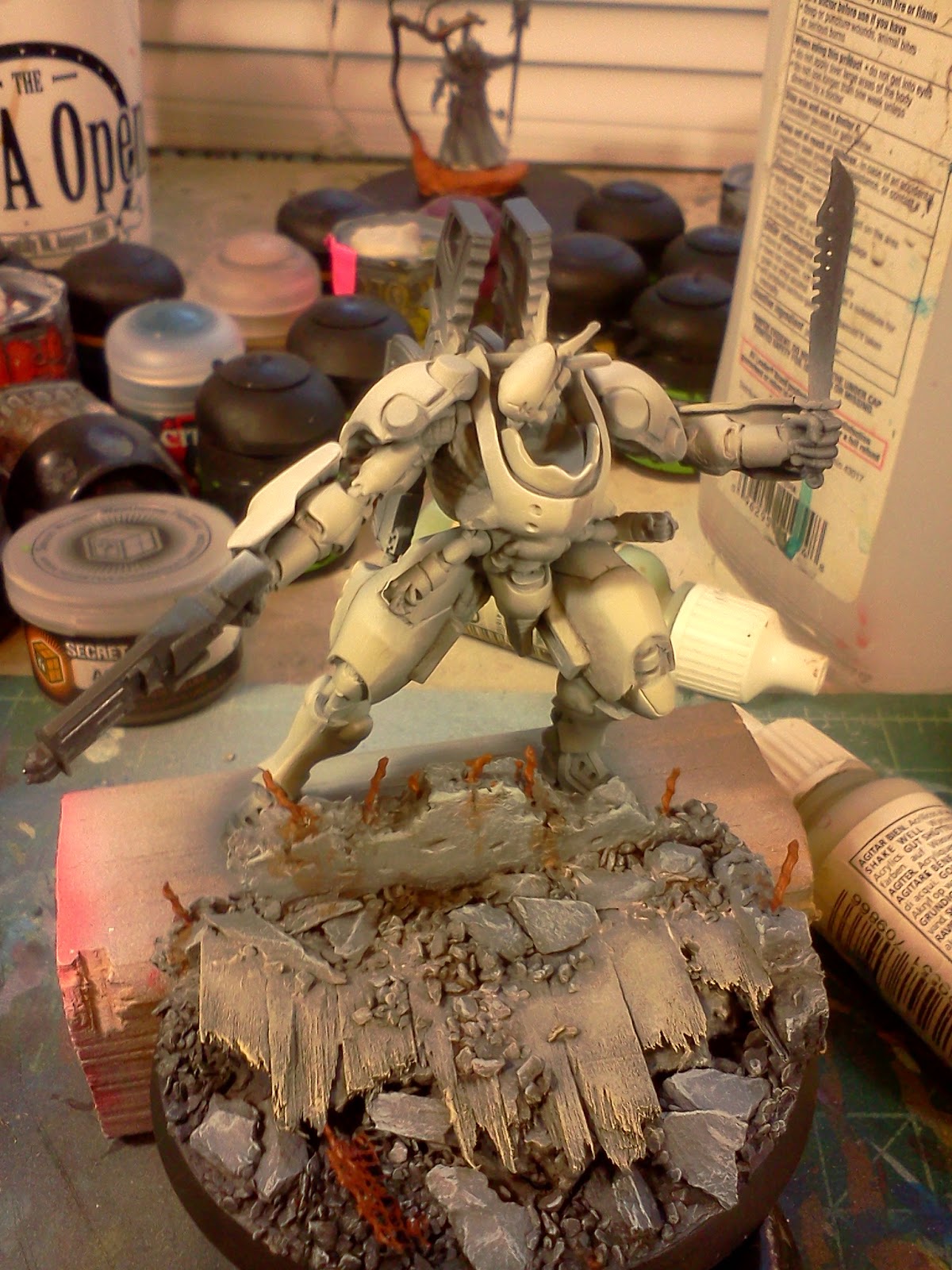 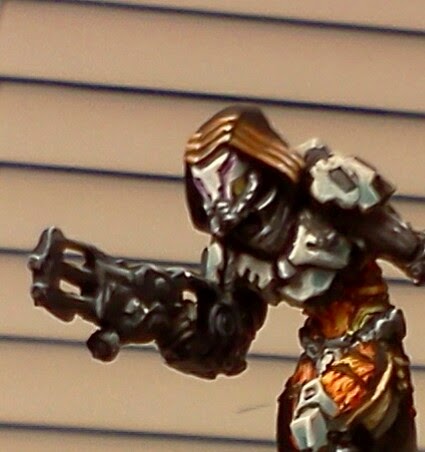 So I snapped some fun pictures with my phone. This triad is ready for gaming now. Next up is the Chaksa contingent of the Triad...and more and more I'm thinking I definitely need a box of Makauls.

I set out to paint these guys at tabletop quality but my excitement over the wonderful sculpts got the better of me and I just went all out. My favorites really have to be the Ectros with HMG, the Gao Tarsos with combi rifle and the Viral Rifle Sakiel. Really though, these are all great models. My least favorite have to be the female Kamael and the Sakiel with Spitfire. 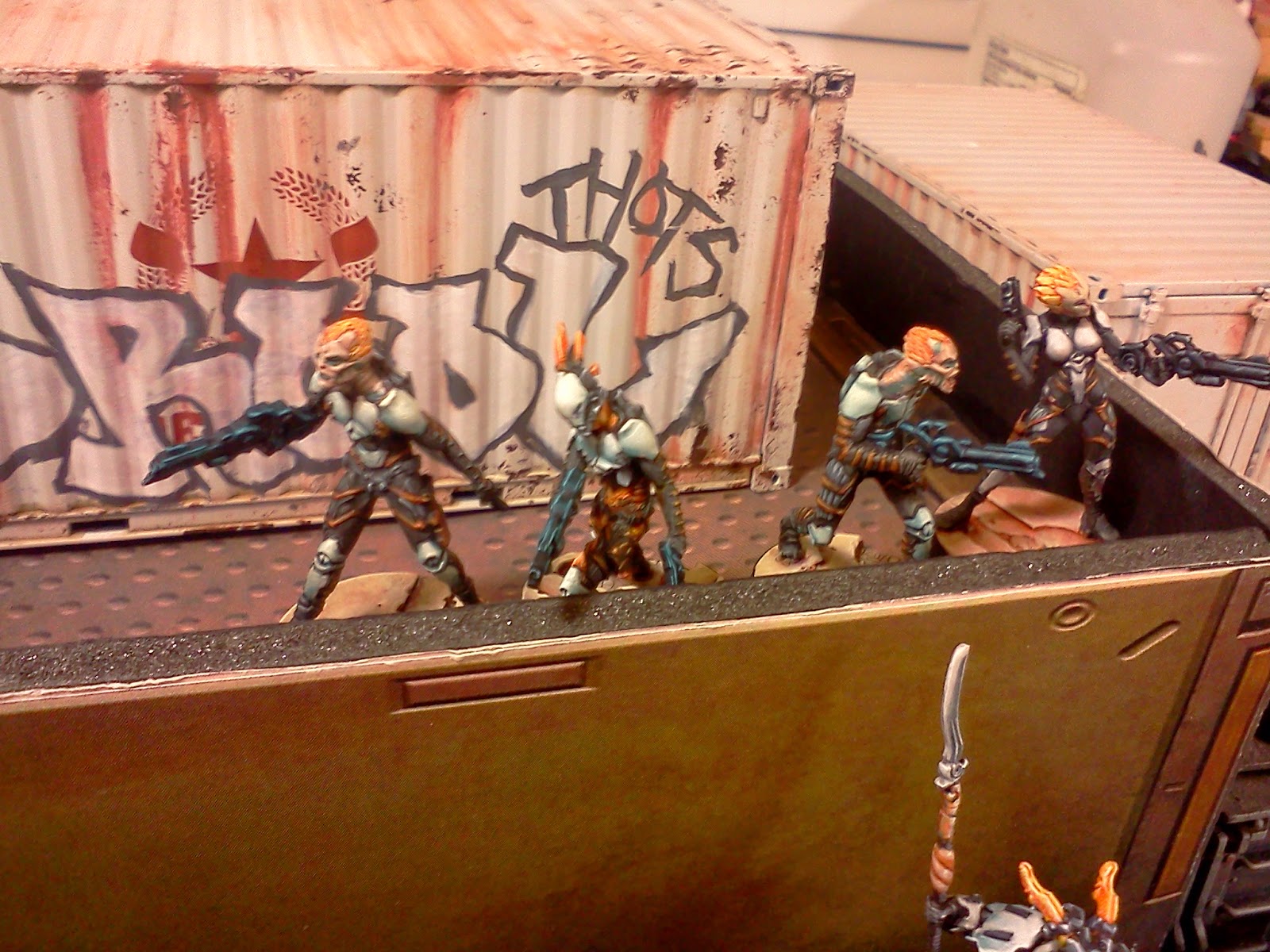 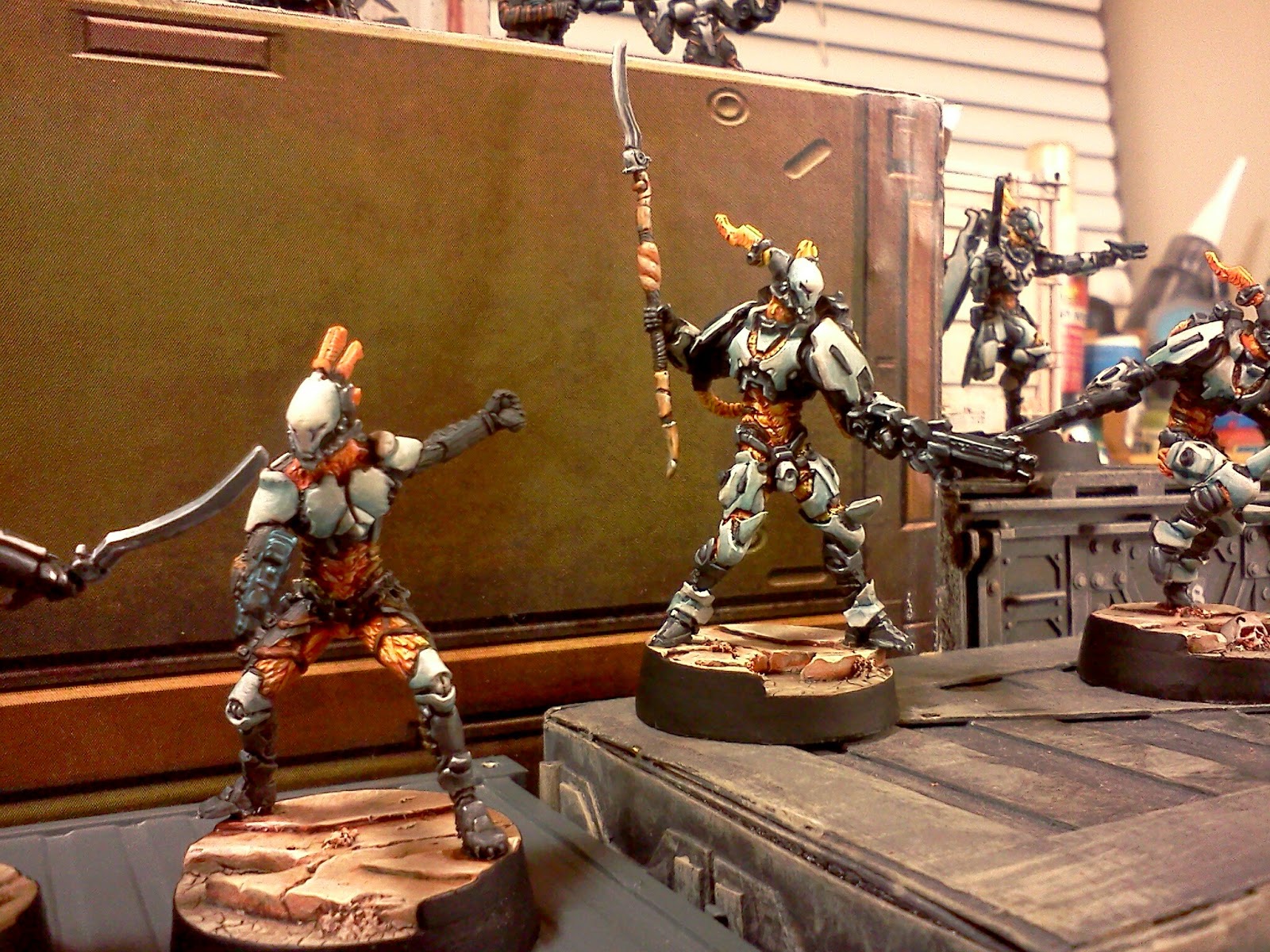 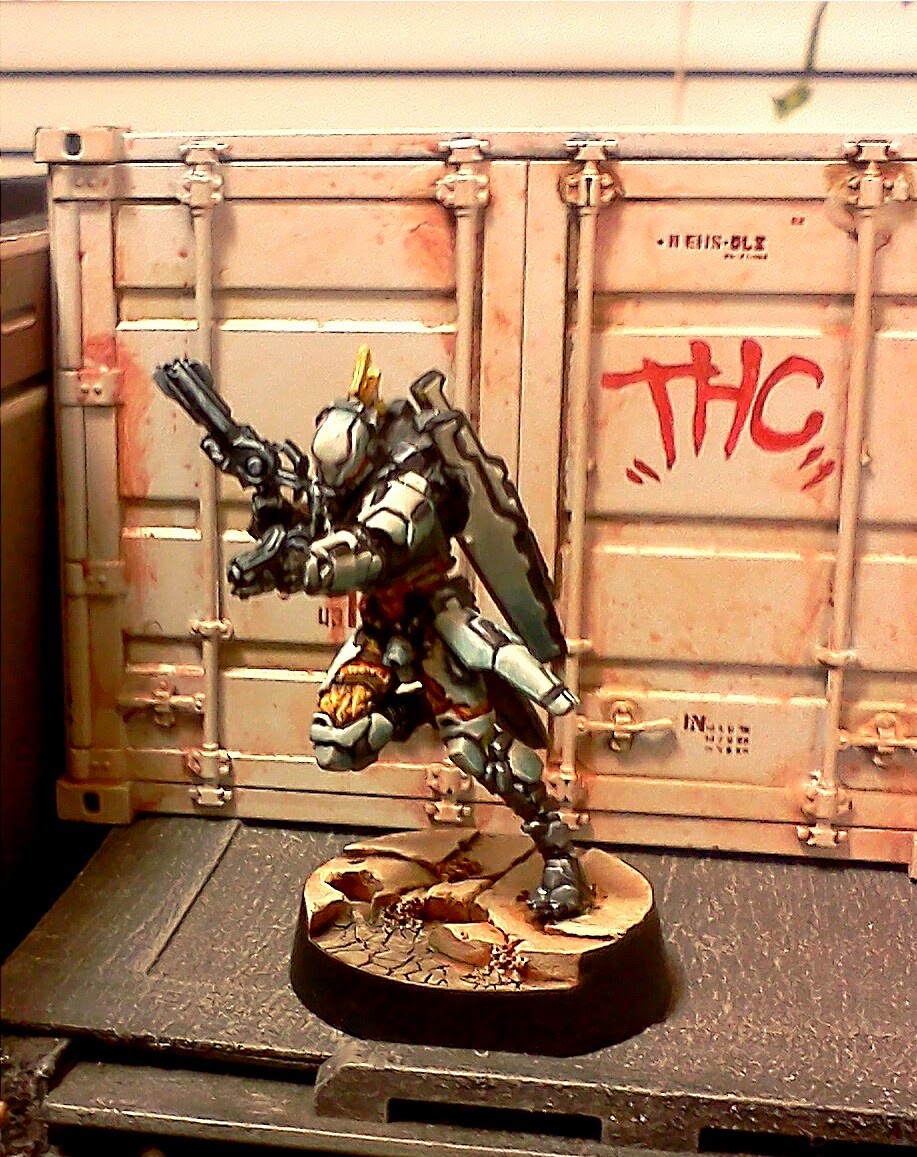 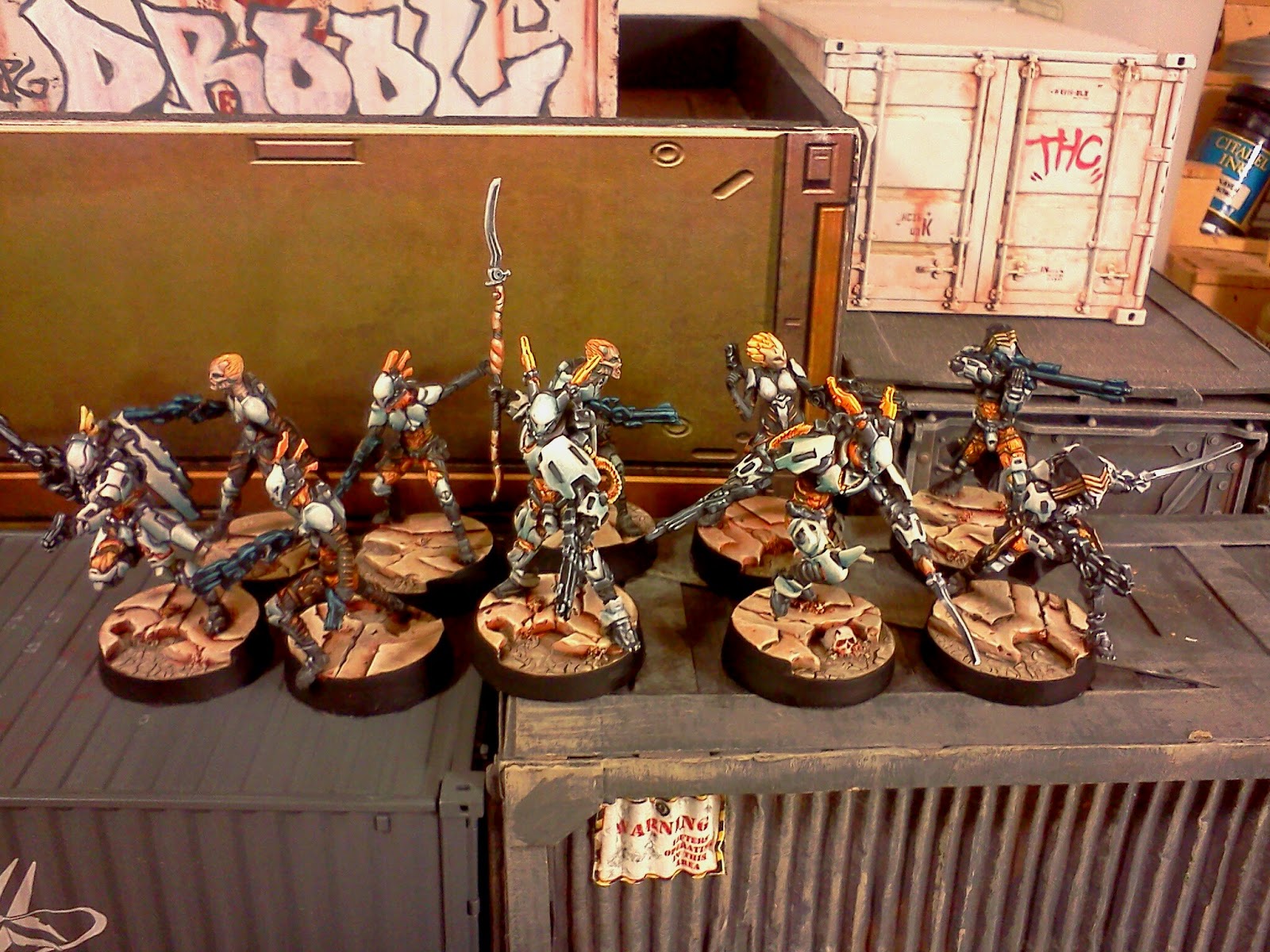 I've been working on my Tohaa for a couple weeks now and I'm nearly complete with a 10-man squad I can take to games and deal out some artichoke-head punishment. 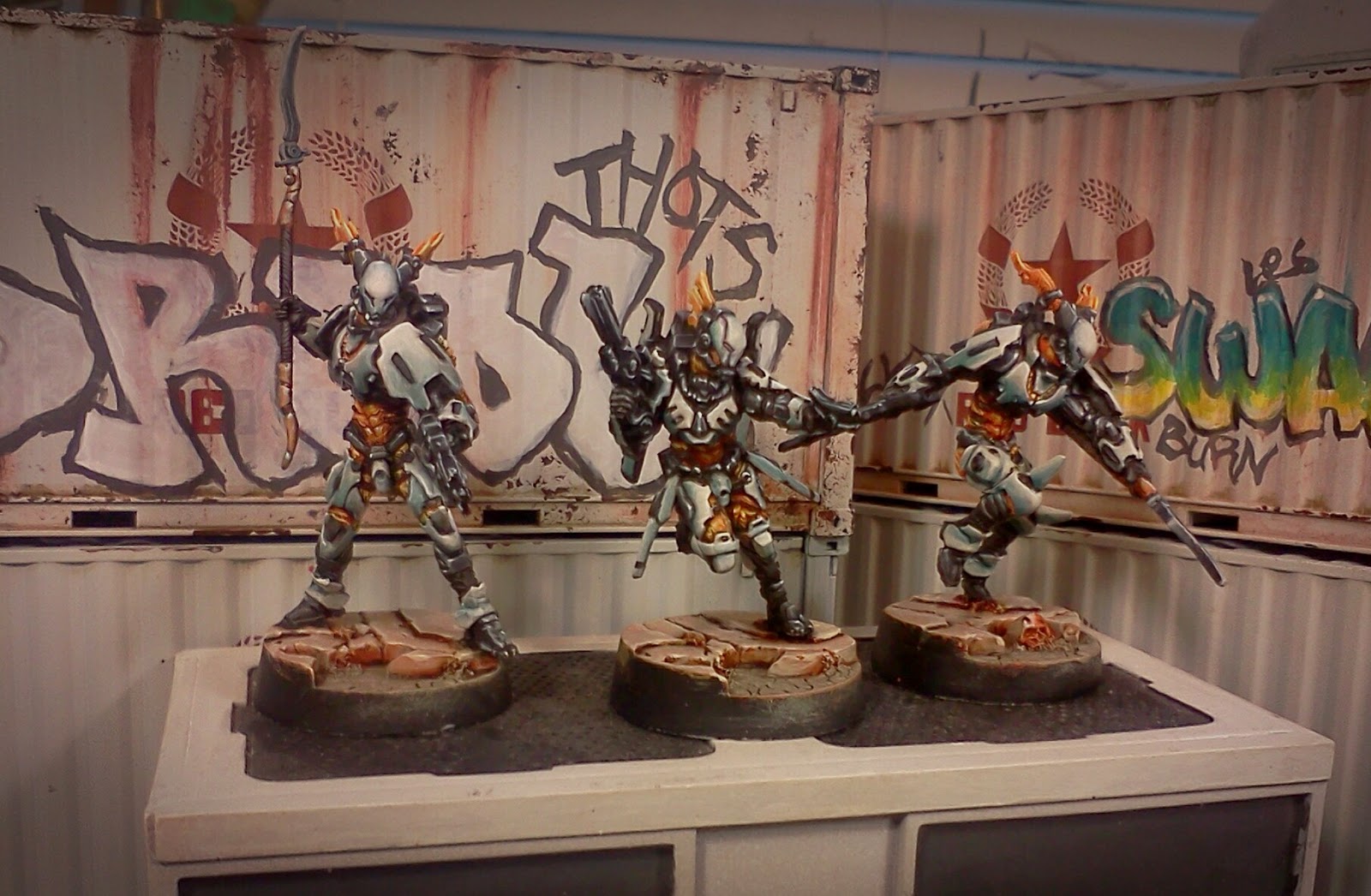 The photo is a little dull and once they're all done I hope to do some good photos to show you all.

The color scheme.
I basically set out to just do the Angel G color scheme but I ended up hardly using straight black and added a good deal more white. I also made mine a cool-white instead of a warm one. A good example of this can be seen on the Ectro HMG's shoulder pad. It's shaded down with GW's Incubi Darkness which is one of my favorite colors right now.

One thing I would recommend to any one collecting and painting a Tohaa squad is, reinforce that Ectros' spear if you can. This one has broken off already and I've had to reinforce it with some copper rod, super glue, greenstuff and lots of frustration. If I were to do him again, I think I might just cut off the spear, replace with a copper rod and model my own spearhead. I just know this won't be the last time I fix this damn weak piece of metal.

I've gotten into making my own graffiti for my terrain. This is basically a process of coping pics from the internet and painting them with a brush. I really find it enjoyable and it really doesn't take more than an hour to do altogether.

I decided to follow up with my previous post finally. Most of the time I am posting to Tau of War, but I've been thinking of switching all of my infinity-related posts here and linking them from Tau of War. So perhaps we'll see some more activity on this blog. Never close down a blog, I say, and never apologize for not posting in a long time. If there's anything I hate more in blogging, its "I'm not dead" posts.

This model was painted with the James Wappell shaded basecoat technique. I find this technique fun at times, and impractical at other times. For this model, I found it a blast because it meant I could just get all the colors down and paint the fig in a single evening. I actually decided not to spend more than one night on him, hence the unfinished base. I will get to that eventually.

The head is from a Nomad Hellcat and the spitfire is from the Pan O Spec Ops troop. Just a quick weapon and head swap and we've got a new model! 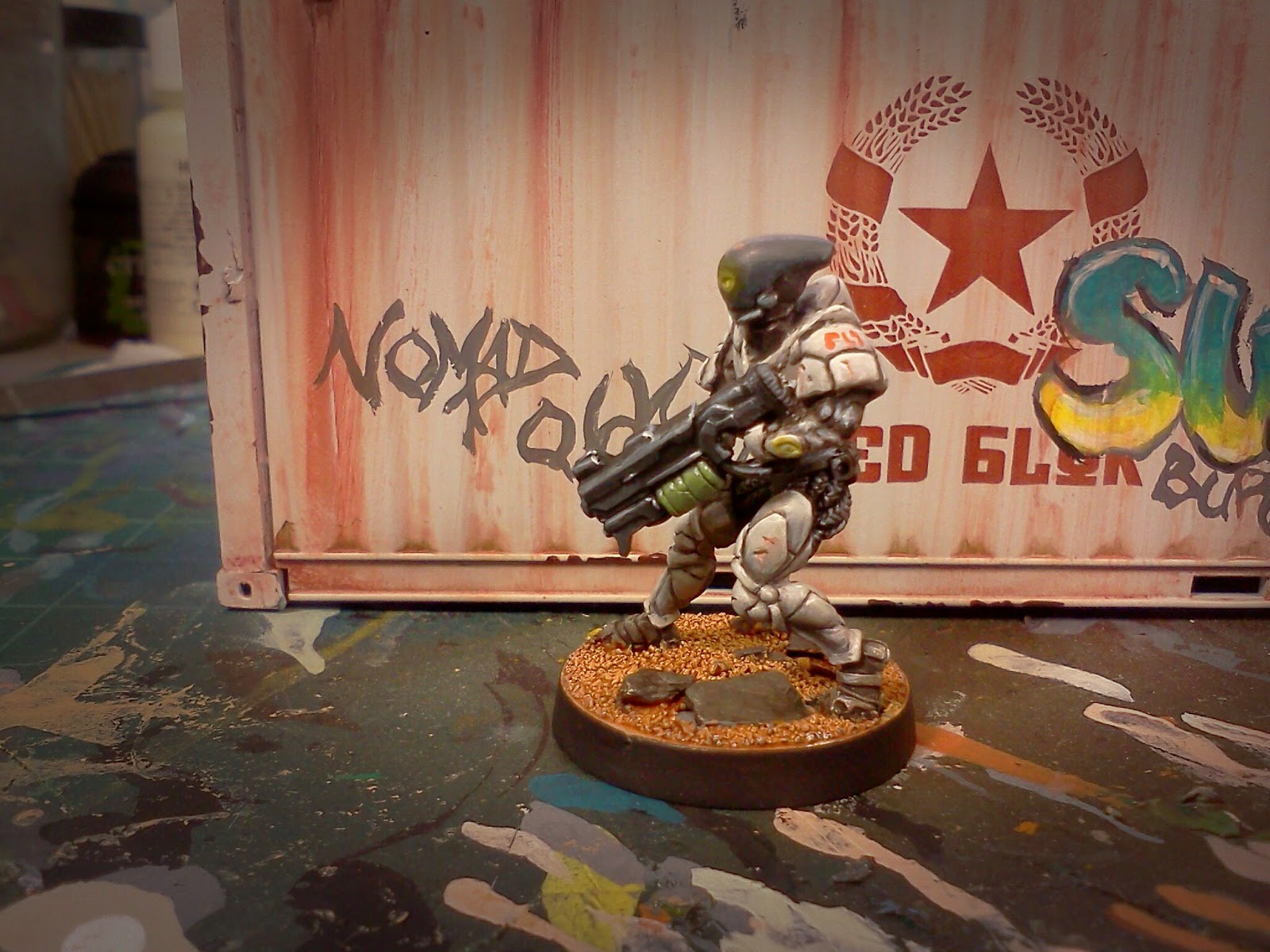 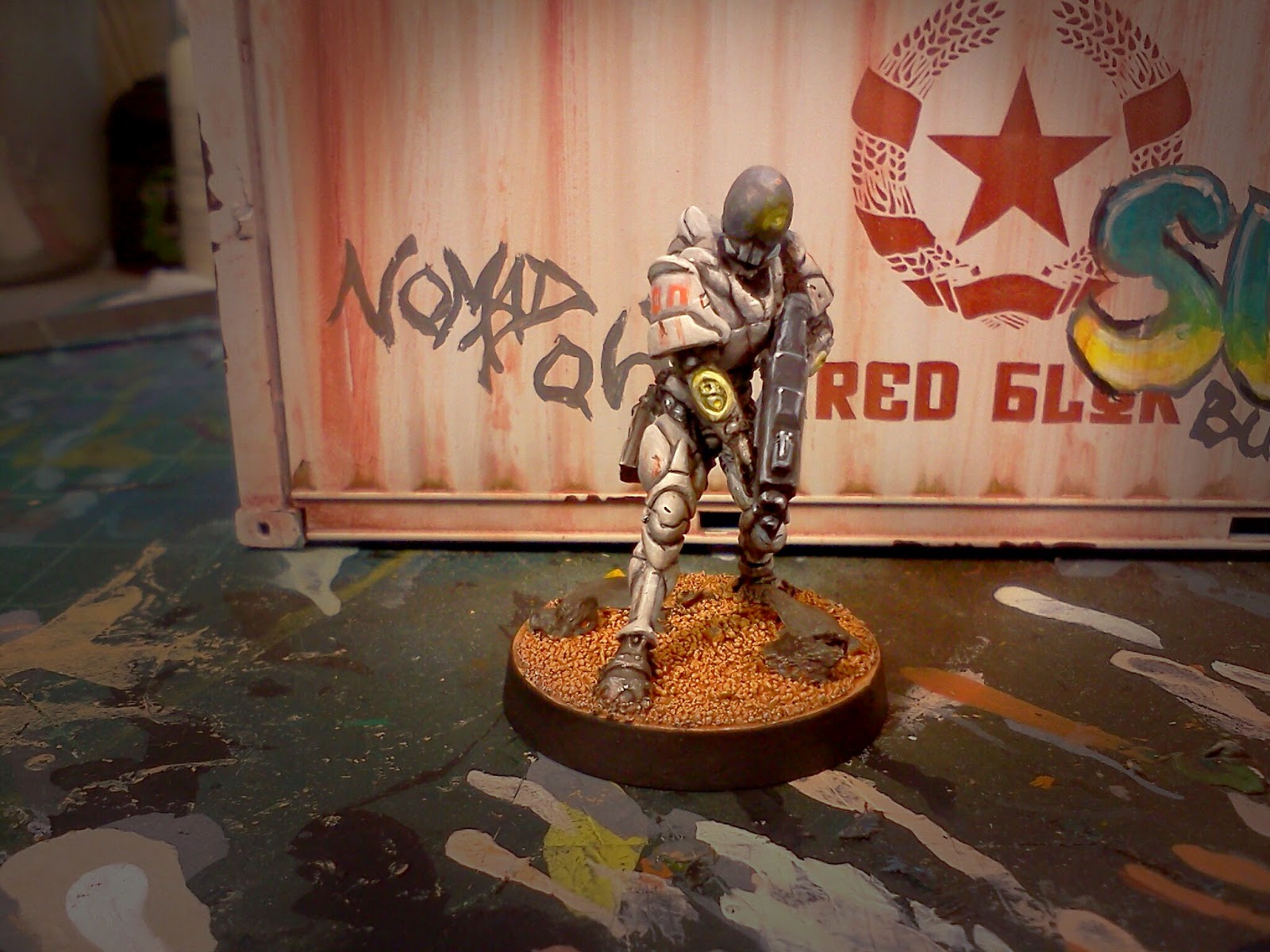 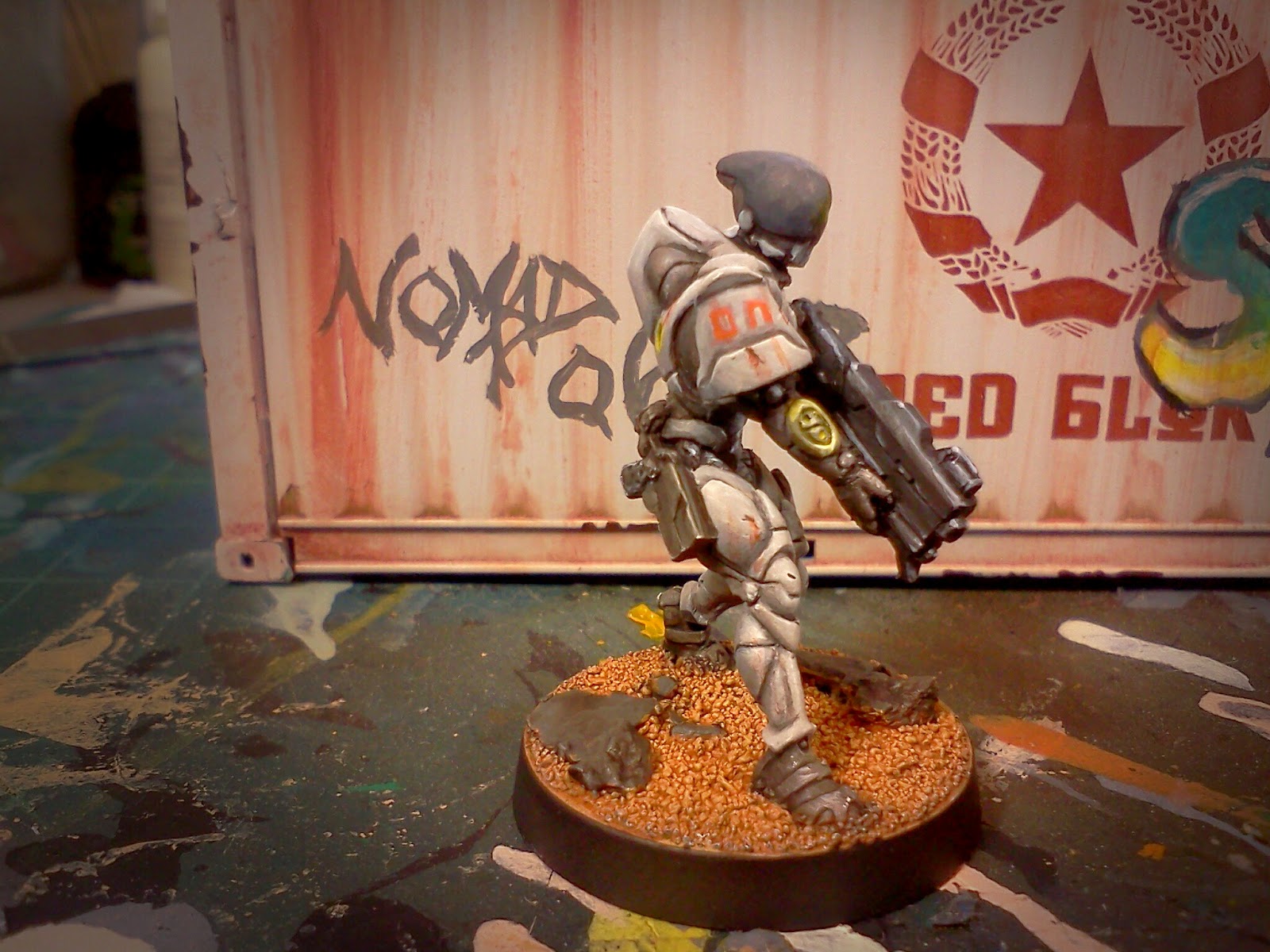 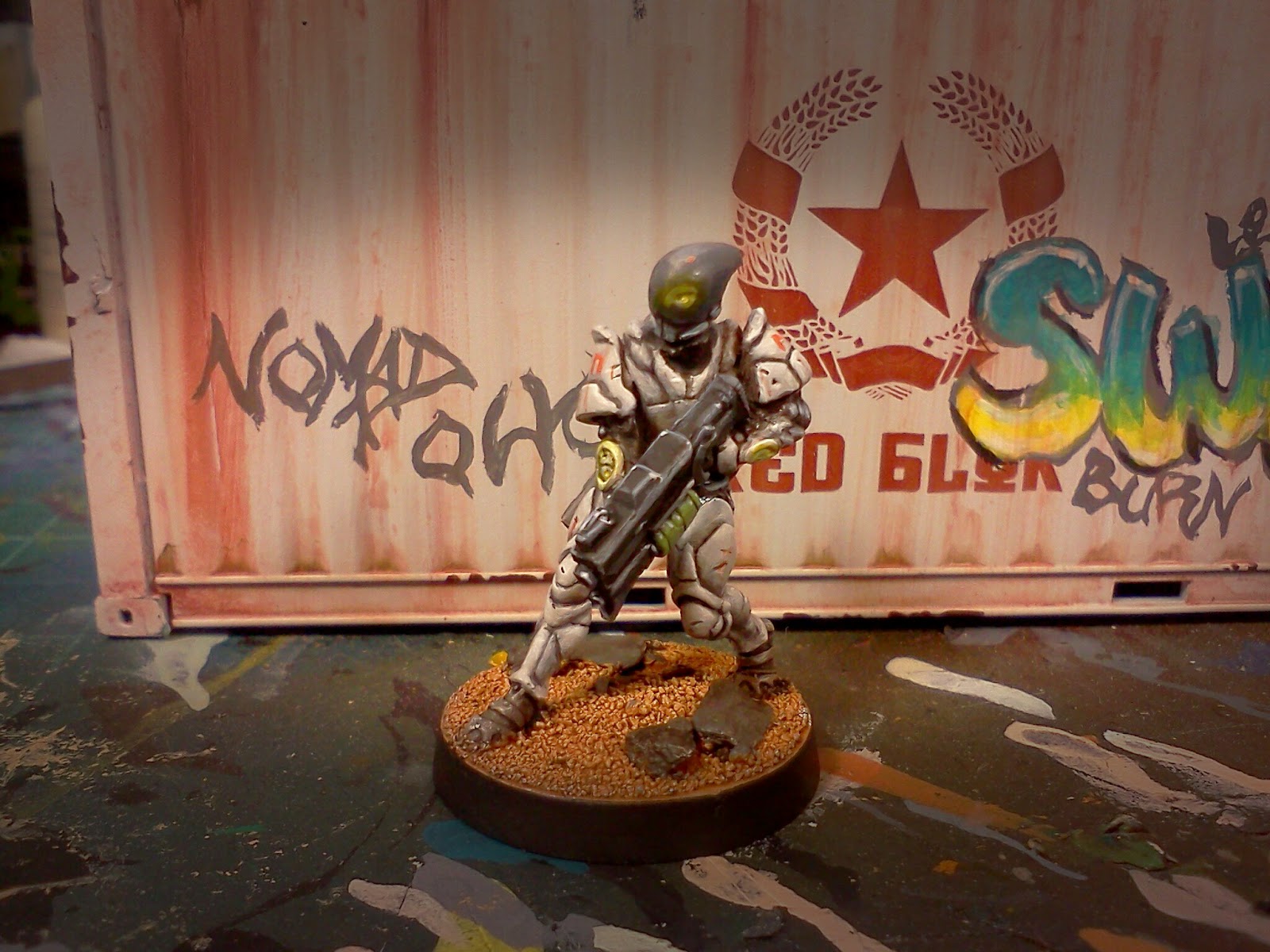 Questions, comments, critique are welcome as always!
Posted by Tim at 4:35 PM No comments:

Metal miniatures make conversions quite a good deal more difficult to successfully execute and more risky. The metal is tough to cut through and because of the extra amount of force one inevitably applies, the risk of injury is greater. They aren't impossible though and the Infinity range has a good deal of multipart models, which make the process easier, though still not as easy as converting plastic models.

Here is a conversion that I have worked on. It basically consists of a weapon and head swap to create a new unit - the Raiden with spitfire. Sure, there is a new model out representing this guy, but I like my conversion better because it's mine. 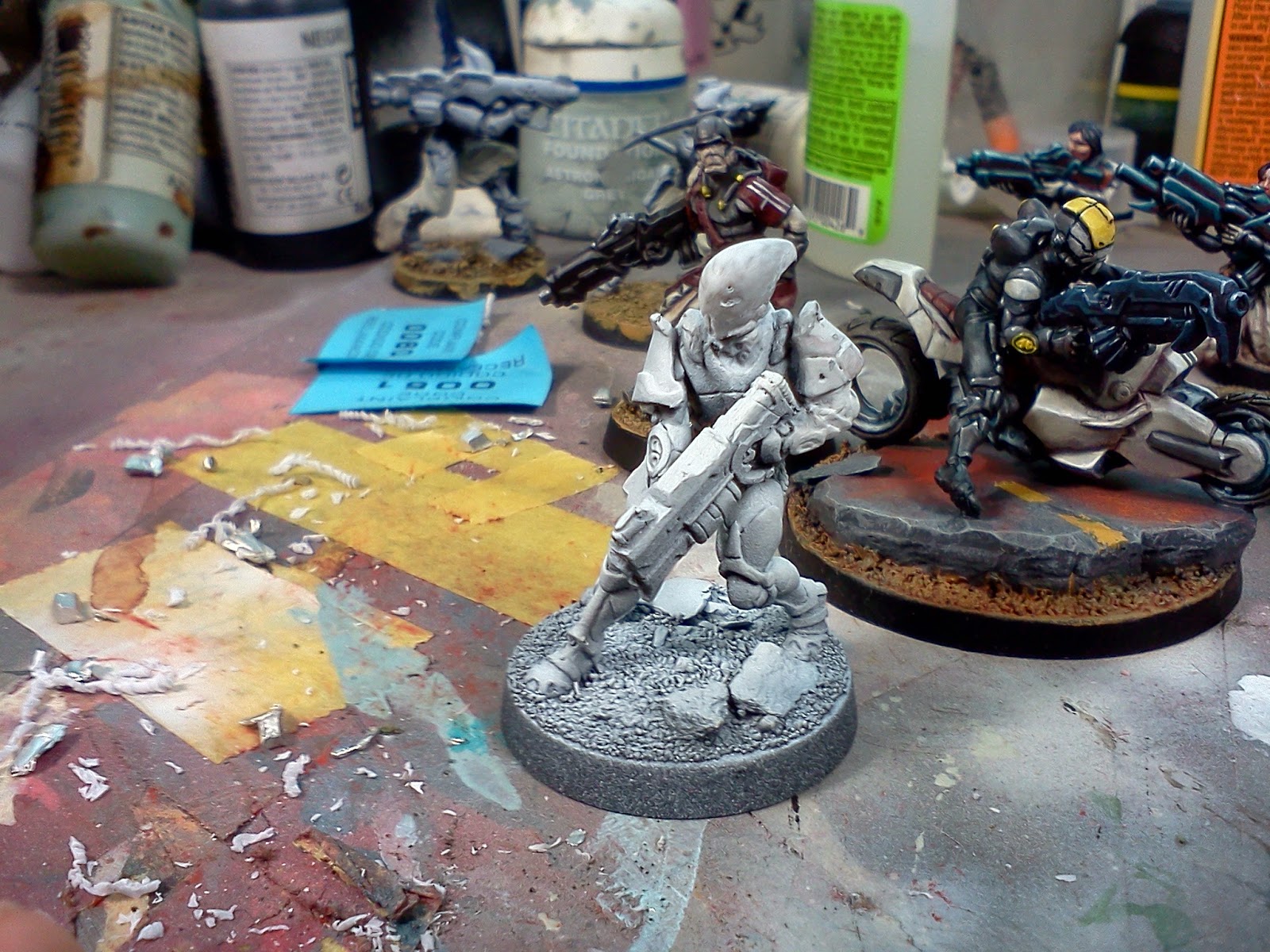 The main model is the Domaru Butai with chain rifle. I clipped off the chain rifle and gave him a Pan O spitfire from a spec ops pack. I had to re-sculpt the shoulder and left hand. I did an OK job, but I'm sure in the future I'll get better at this. For now, job's a good 'un.

The head was clipped off, carefully, and I added a head from an old Nomad Tomcat. You'll notice I really don't care about sticking within one faction, all I want to do is create an interesting model when it is finished. He'll probably get painted over the weekend and I think that will make the conversion work better.

My next conversion will likely be a second version of the Raiden, using a ninja head on the C.Guard torso with spitfire, with Haramaki legs. More to come.
Posted by Tim at 9:54 AM No comments: 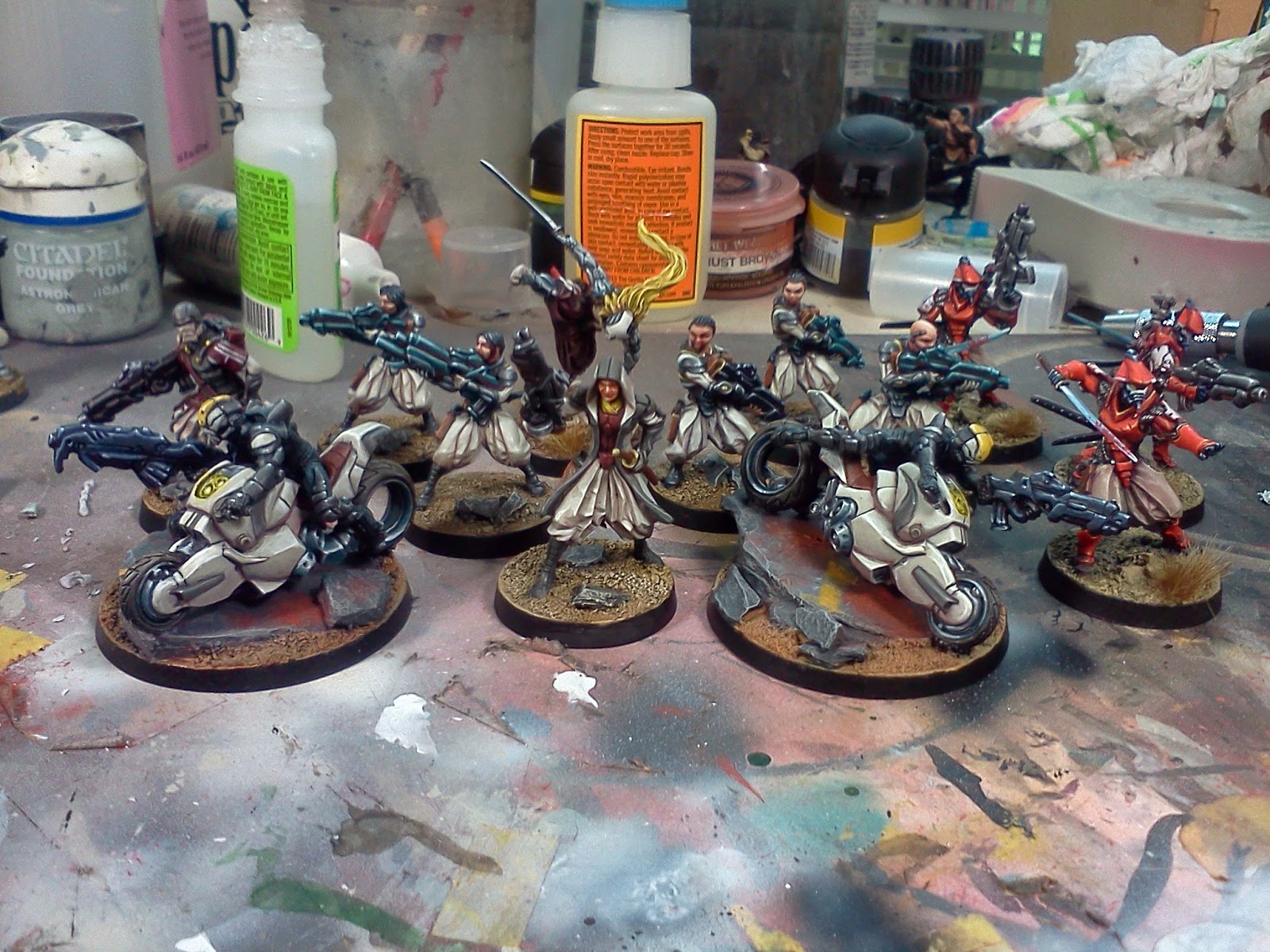 Here is my JSA army collection. It's an eclectic group given that I've switched color schemes at least three times since I started it, but at least they are all painted now. I'm actually less concerned about cohesive color schemes in Infinity since the model generally act on their own, as opposed to 40k where units look odd if grouped together in different colors.

I still have models to add to it, but its playable now, if a little ineffective. I've yet to add the remainder of the Haramaki, which I may actually do over as a group. 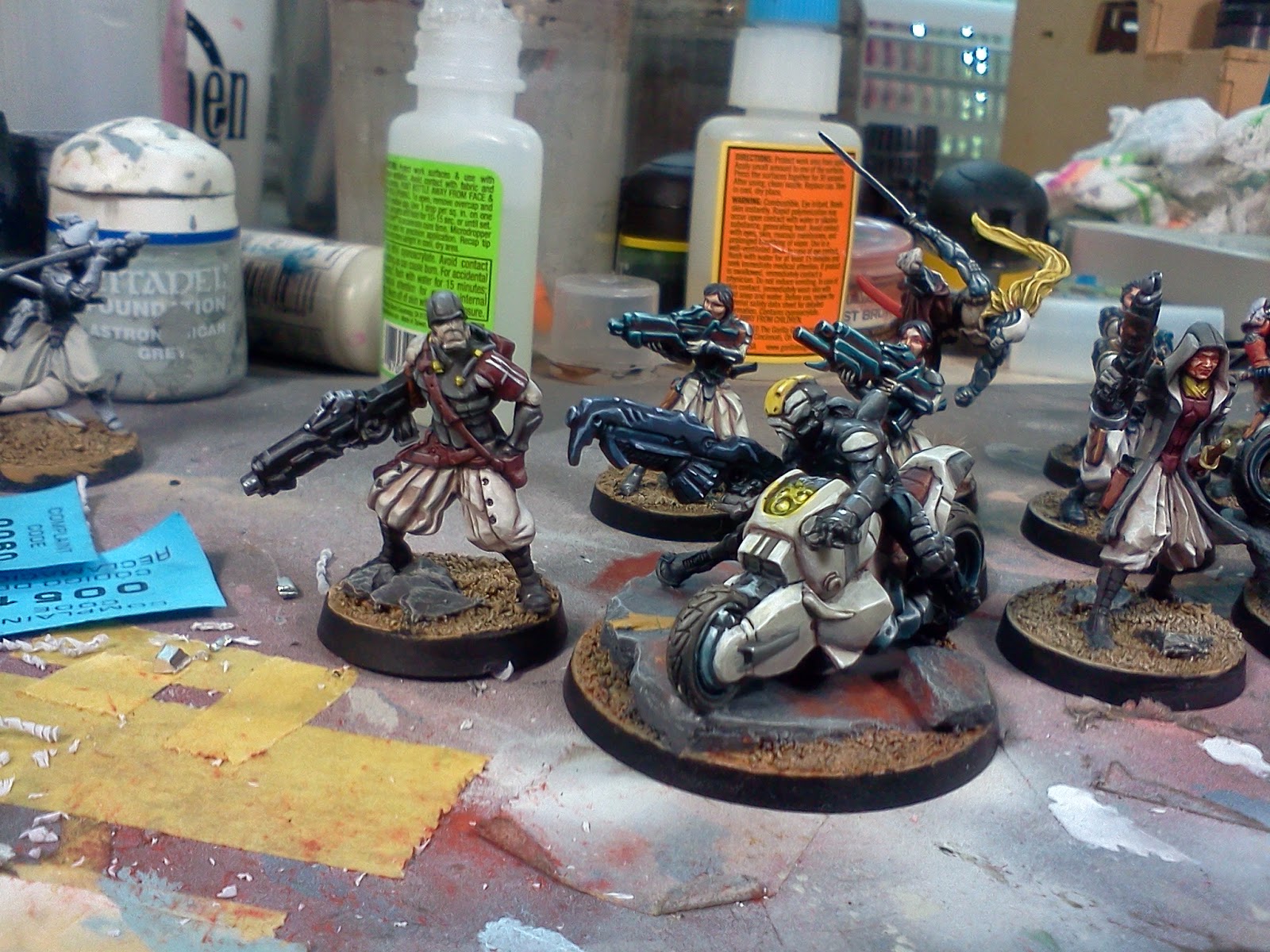 You can see some changes on the bikes, which I'm not entirely happy with but they'll do for now. 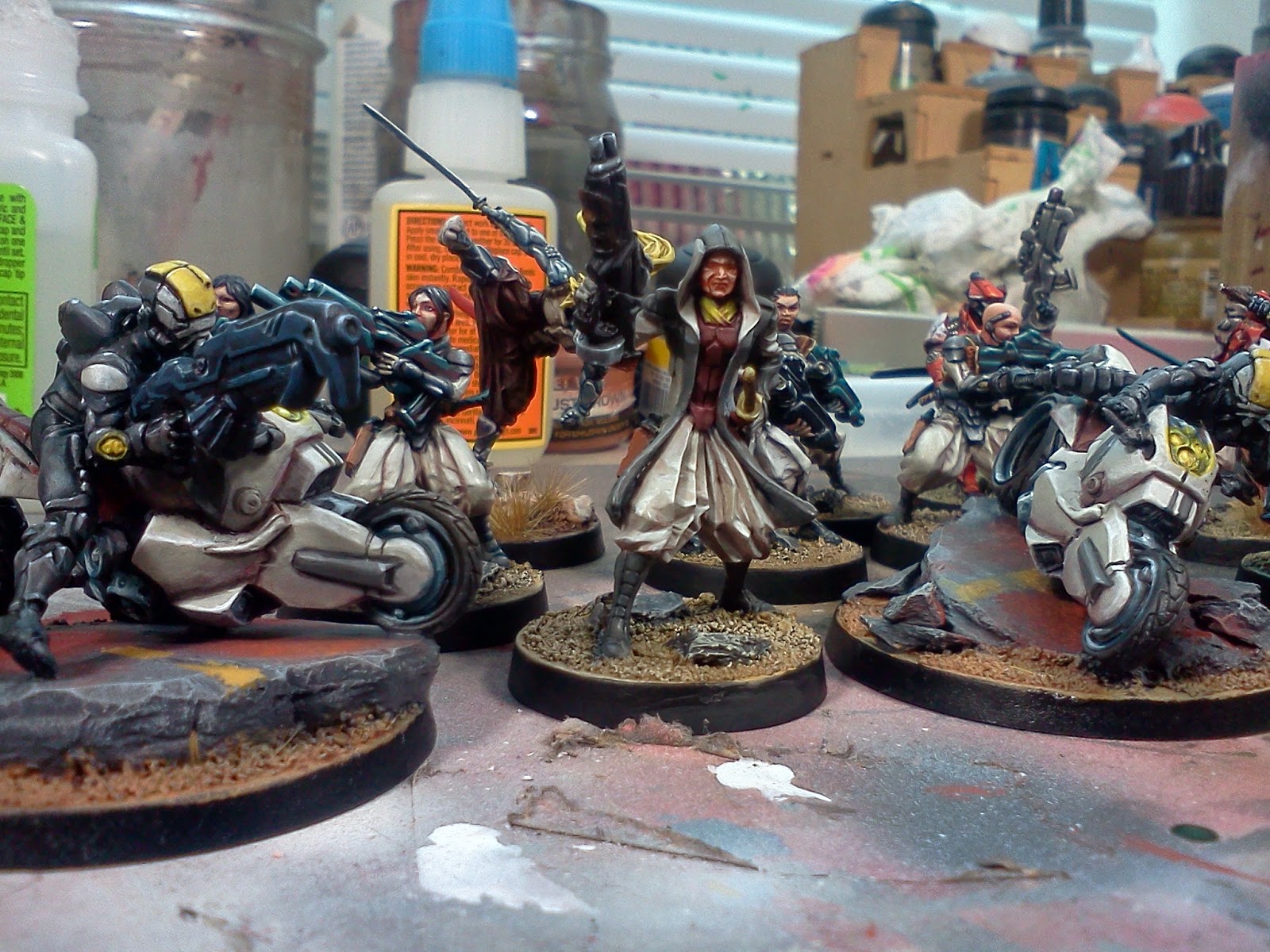 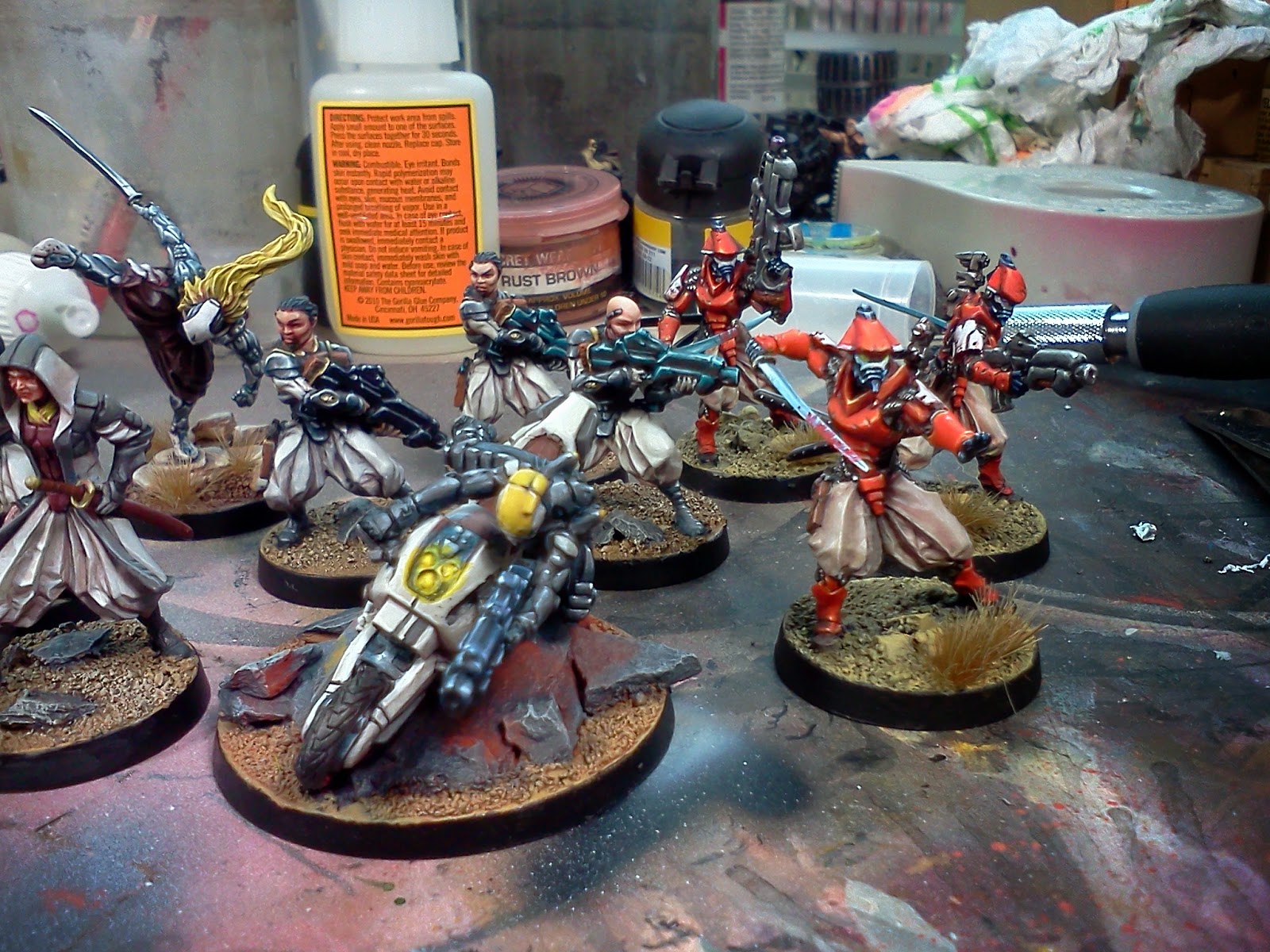 I've played one game with these guys, and lost...rather embarrassingly. They'll be back on the field though at the next chance I get.
Posted by Tim at 5:22 PM 4 comments: